Mr. Turing showed off his superior intellect very early on, being held in high regard throughout his scholarly years due to his affinity for mathematics and problem-solving. After an impeccable record in school, Mr. Turing was given a scholarship to King’s College Cambridge in 1935. After solving previously unsolvable problems and creating a name for himself, he began working part time at the UK Government’s Code and Cypher School. The main goal of the cypher school was to crack German code and gain intel to their motives and plans. 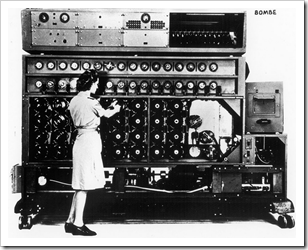 Throughout WWII the German code was too complex for the allied forces to crack, keeping them several steps behind the Germans at all times. The machines that were responsible for encoding German messages were called Enigma machines, and they could encrypt messages with such complexity that by the time allied mathematicians deciphered them, they were no longer actionable.

The Enigma Machine had adjustable pins, which determined the scrambling of letters. The sending operators encrypted messages which were then sent by airwaves. The message could only be read with a decryption key which was given to the operator receiving the message and keyed in to another Enigma machine.

Although the Allies could easily intercept the radio waves, they were indecipherable for much of the beginning of the war.

In face of this difficulty, one of Mr. Turing’s greatest accomplishments was born. Building upon the work of two Polish mathematicians he was able to create The Bombe, a decryption machine which ushered in the era of not only modern cryptography, but also electronic, digital computing.

The Bombe functioned by deciphering messages at speeds with which no human could. It decoded the thousands of messages intercepted daily by allied forces.

The results were passed on to human operators for further review and action. Mr. Turing’s machine turned the tides of the war, shifting power towards the Allies’ side and allowing intel to be processed and handled much more quickly. In the battle of information and intelligence, the Bombe claimed the throne, outwitting the German enigma machine.  Literally speaking, Mr. Turing’s machine was ‘the Bombe’.

Mr. Turing died in June 1954 aged 41. He was found in bed, with a bitten apple next to him, containing cyanide which resulted in his death.

Many believe that the Apple logo is in memory of Mr. Turing, as he was the forefather of modern computer science.

If you are interested in a more in-depth look at his life, I recommend watching the movie: The Imitation Game. Mr. Turing is played by actor Benedict Cumberbatch.  It’s a film that can be enjoyed by computer geeks and cool people alike.