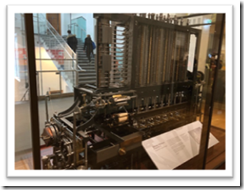 Dec 26th would have been Charles Babbage’s birthday if he were alive today. Mr. Babbage (1791-1871) was an English mathematician who is credited with creating the world’s first programmable computing device known as the Differencing Engine.

While Alan Turing is credited with the creation of the world’s first electronic computer, Charles Babbage’s creation, an automatic calculator, was mechanical.

In 1821, Babbage invented the device in order to compile mathematical tables. He devised a secondary machine known as the Analytical Engine or Differencing Engine No. 2, that could perform not only mathematical calculations, but almost any type of calculation. This device was so advanced that it required manufacturing technology which was not available at the time, and funding for his project was unfortunately suspended in 1832 by the British government.

Several years later, in 1843, a Swedish man named George Scheutz, constructed a device based on Babbage’s design which calculated mathematical and astronomical tables with accuracy never achieved before.

To commemorate his 200th birthday, in 1991 the London Science Museum reconstructed the Differencing Engine No.2 from Mr. Babbage’s design. Unsurprisingly, it worked flawlessly.