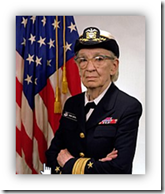 Ms. Hopper earned a Ph.D. in mathematics from Yale University prior to joining the Navy Reserve.

In 1944, she worked on the Harvard Mark I team and later was put in charge of the team that developed the UNIVAC computer.

She believed that it was possible to program computers using English language words instead of the machine language used natively by computers. She went on to develop the first compiler (then called a program linker) which allowed for a (relatively easy) English-word-based programming language to be converted into machine code.

This led to the development of the COBOL language, where she helped a team to develop the first ever machine independent language that could be compiled into machine code.

The U.S. Navy’s ship “USS Hopper” and the Cray XE6 “Hopper” supercomputer at NERSC (National Energy Research Scientific Computing Center) are both named after her.