Computers can shut down for myriad reasons, from a faulty main board, memory or power supply to a faulty video card. Lately we have seen several Windows 10 computers abruptly shutting down due to issues caused by video card drivers.

We have seen this behavior on computers with older model NVIDIA VGA cards, and at the time of this writing, neither updating the NVIDIA drivers or using the MS HCL drivers fixes the issue. If you suspect you may be experiencing this issue, there is a quick and easy way to test if the video card driver is the cause.

To test the driver, open the Windows 10 device manager and switch from the current video card to the MS generic VGA card driver. To do this, right click on the video card(s) and select update driver as shown below.

Select browse my computer for drivers, then let me pick from a list.

From there, select the Microsoft basic VGA driver. 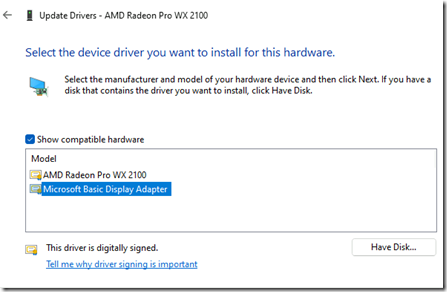 Run the computer using this driver until enough time has passed without a shut down. If the computer does not shut down with the basic display driver, you may want to look at updating your driver or replacing the video card.